The first textbook to circulate across thirteen colonies was The New England Primer. It was the most widespread primer in the 18th century and kept its popularity spanning throughout the 19th century. This book was meant for both beginners and intermediate readers, starting with alphabet and moving on to lessons on religion and morale.

The author, Benjamin Harris, lived in Boston in the end of the 17th century and ran a bookstore, a coffeehouse, established a printing business and became an editor of the first multi-page newspaper, that he was publishing in the United States. 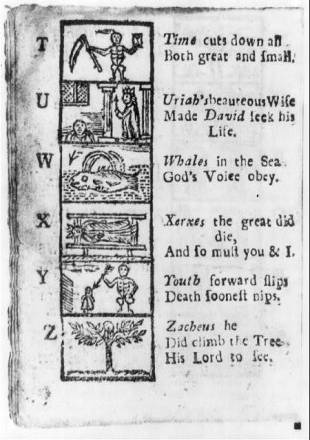 Each edition differed sharply from the previous one in terms of content and quality of engravings. Unlike London editions which had a more rigid editorial policy, this one did constantly improve. Later versions included changes in language and spelling. So, in the rhyming alphabet, the original verse starting with the letter ‘Y’ is rather unclear:

Further editions embraced the same idea – anyone can die at any moment, even those who are young. However, they are less obscure. Variations can be seen in 1777 and 1800 issues.

While youth do chear
Death may be near.

No Youth, you see,
From death is free.

Illustrations that decorate the alphabet continue the general idea of the verses. For instance, the notion of mortality is expressed with skeletons holding hourglasses and a spear directed at a child.

In the beginning of the Middle Ages, the Latin alphabet had only 24 letters; this edition contains this relic as well. By this time, there was no spelling difference neither between letters [I] and [J] not between [U] and [V].

Suffice it to say, this kind of an ancient alphabet does reveal some terrifying details about the English language of the 18 century. It shows the power of religion and somewhat scary way to present notions of life.